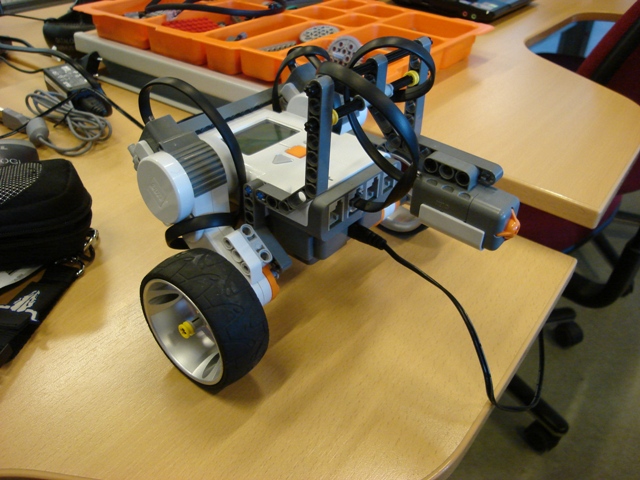 The plan for today is devided into two parts. First we will investigate and evaluate the behaviour of BumperCar2). And second make suggestions on how to improve the Arbitrator in LejOS to better suite the model described in Krink.

This will include the following:

Suggest alternative implementation of an Arbitrator that will make sure that takeControl of all behaviours are called each time through the loop.

The program BumberCar.java is run in the NXT and we observe what happens when the touch sensor is kept pressed constantly. We expect the HitWall behaviour to be active making Marvin go backwards and turn over and over. This is not what happens though and the reason for this is found by inspection of the arbitrator within the LejOS system. The source code for the arbitrator is shown below.

The conclusion is that the arbitrator is working improperly in terms of a desired interrupt for the Exit behaviour. There are no reasons for further testing of this arbitrator as we may as well start to modify the arbitrator. One could of course write a new arbitrator from the ground off, but we believe that the arbitrator can be properly modified towards our desired goal. If we omit the line (i != currentBehavior) it is possible to run the same behaviour over and over, which could be important for an alarm sensor, which may have reason for re-activating itself. We may add another condition to the while loop, which allows an interrupt from a higher priority behaviour, but a final decision has not been made. The remaining time of this lab session we decided to devote to Motivation functions instead of working on a new arbitrator.

The “normal” case is that when hitWall is active, Marvin will back out, turn a little bit an step out of that routine. But what if the hitWall routine is activated repeatedly. What happens then? In the group, we talked about the case where Marvin would hit a bouncing wall, e.g. a wall with a spring attached to the back of it, so that it would move towards Marvin when pushed once. In this case Marvin would react the normal way, that is, back out and turn, but the wall will then hit him again, and this will repeat itself. In this case, it would be convenient to implement some sort of mechanism that would help Marvin to get out of that situation. Lets could it a motivation to do something. Thiemo Krink5) has some proposals on this topic. Marvin could have some sort of motivation factor to get away from the wall on change direction. As is seen in the picture below we have drawn a simple graph to illustrate how we think Marvin should behave in the case where he hits the wall several times. 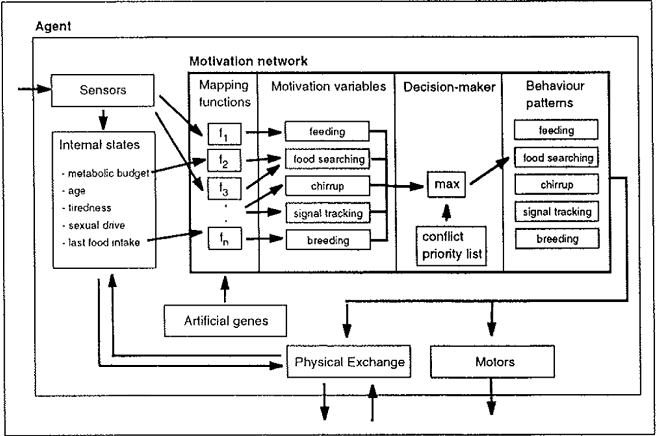 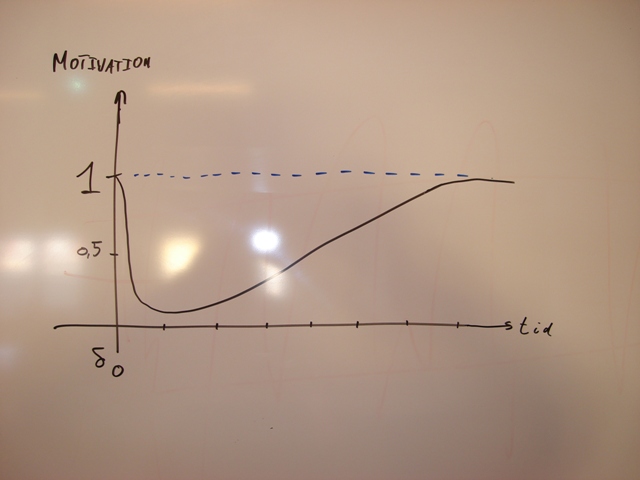 The implementation of this could be e.g. 10-20 seconds time interval from first hit to full motivation and could be an integer or percentage (floating point number) that will increase the speed Marvin backs up with and second the degree of turn that he makes.