What is that thing?

Roomba 560 from iRobot is a vacuumcleaning robot. It is one of the cheapest on the market, because it is created by a company that normally makes military robots such as bomb or mine neutralisers and who therefore only needed to develop a vacuum cleaner, as opposed to those vacuum cleaning robots created by companies normally making vacuum cleaners, who had to develop a robot and robotic system, which is by far more complicated. It has done well various tests, and is rated especially worth while because of its lower price. 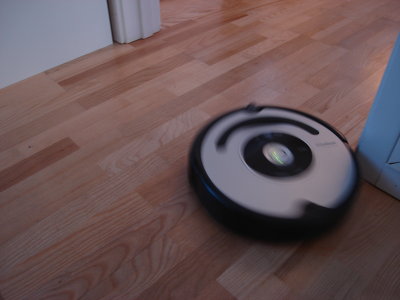 Here it is seen running. It either runs by following a wall, or by randomly criss-crossing the room. This may not seem very practical, and it is certainly not the way you would clean the floors, but it is thorough enough as it runs for a relatively long time (approximately 45 minutes per room) and the random-algorithm makes sure it cleans all areas (at least over a couple of times).

We have found that running the cleaning robot every day reduces the amount of dust and dirt being swished into the air by us and landing on furniture significantly, and hence we only need to dust off our rooms once a month. 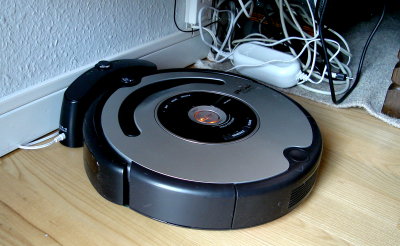 Here Roomba is seen “sleeping” in its docking station. The orange light shows that it is recharging its battery. This takes approximately 30 minutes. The robot is controlled via the buttons on its top panel. Remotes are also available.

Cleaning of the cleaning robot 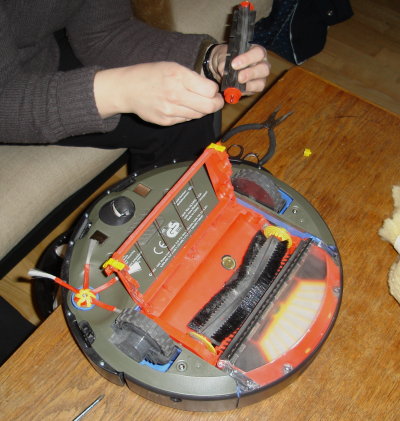 Roomba takes up a little of your time now and then, when it is time to clean it.
Most of its joints can be disassembled, so hair and dust can be removed.
This cleaning process is the only “user time” needed to run Roomba. It takes approximately 5 minutes 2-3 times a week to do it. 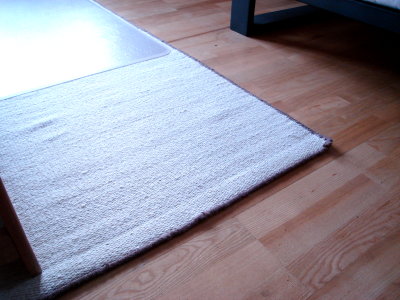 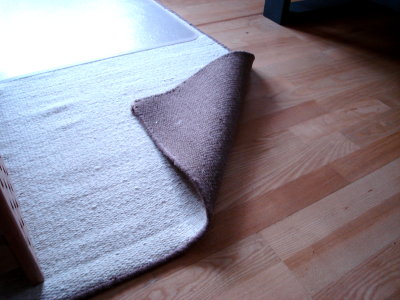 The Roomba has a tendency to fold carpets. This however is usually not a great problem, since it can unfold them again, when cleaning from the opposite direction. 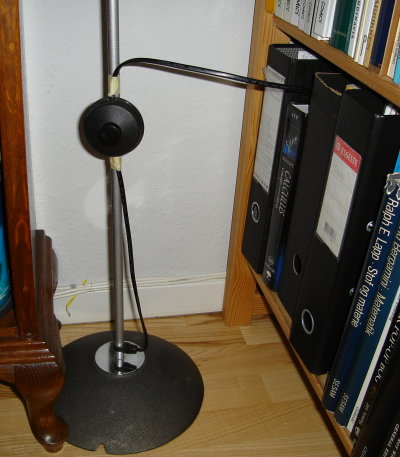 Wires on the floor seem to be a bit of a problem. Roomba winds up in them, and tends to drag them along with it, worst case, making things drop to the floor. This problem calls for rather untraditional solutions, as the one shown above, where the wire to a floorlamp has been taped onto the pole, thus running in mid air. 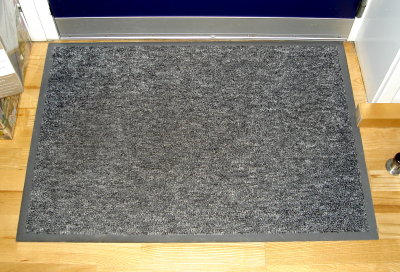 Door mattes usually come in dark gray or black colours. This is a problem to Roomba, since its cliff sensors works by sending light onto the surface on which it is running, and interpreting on the reflection. A black matte therefore makes Roomba think it is about to dive off cliff.
To solve this mattes in lighter gray can be used.
Another matte problem shows itself, when the matte is a lightweight matte (non rubber). Here Roomba tends to push the matte around, instead of vacuuming it. We have solved this problem by sticking the matte to the floorboards using tesafix.
The above image to the left illustrates our front door matte, which has a light enough shade of gray for Roomba to work with. The right one shows our sticky mattes. 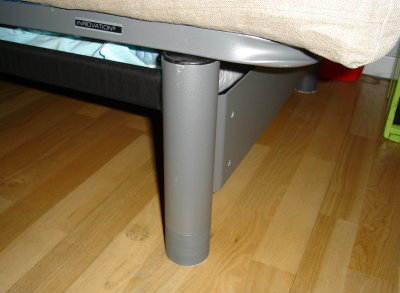 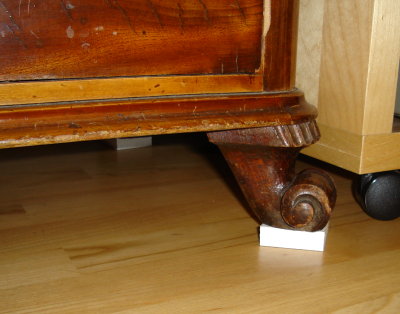 Some furnitures has legs not exactly high enough for Roomba to run under. This can easily be solved, using leg extensions. If you do not wish to use leg extensions Roomba will just hit the lower edge of the furniture and is not going to clean under it, or it may, in the worst case, get stuck, it the furniture has an inwards-sloped underside, such as our sofa bed on the left. 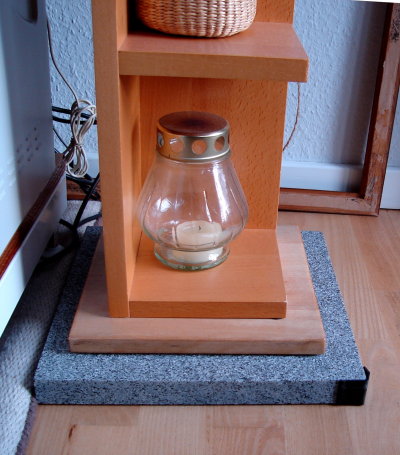 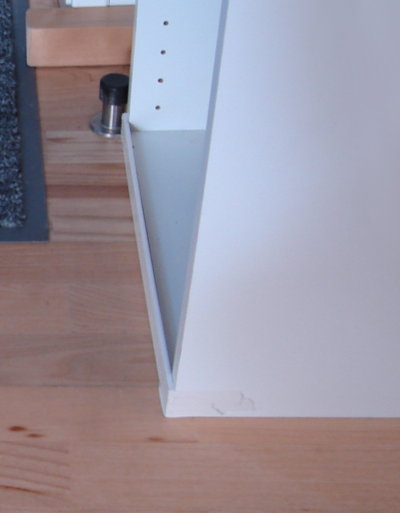 Even though Roomba 560 has wall sensors making it slow down as it approaches a wall, it may not work as well as you could wish for in all cases. For instance if the object Roomba is approaching has a very dark color (same problem as with the cliff sensors) or if it is approaching at an angle. Therefore, to protect the bumper and wall sensor casing in the front of the robot from excessive damage, we have shielded the sharp corner of the stone supporting the column in the lefthand image. By the way, the stone is there in the first place in part because the column supports a heavy plant and we were unsure of whether Roomba was able to hit the column so hard that it would topple over, and in part because the lower shelf of the column was low enough that Roomba would drive up onto it, but high enough that it would also sometimes get stuck there. This poses another problem - if your doorways have thresholds you may not be able to use Roomba. It is able to get over thresholds if they are not too high (1-1½ cm) or if you have slopes leading up to them, but if the thresholds are higher than this, or if you are unlucky that Roomba hits the slope at an angle, it may get stuck. One solution to this is preventing Roomba from approaching the threshold, for instance as shown in the righthand image of an open shoe cupboard having a homemade plastic barrier taped to it, or by placing other types of obstacles in or in front of the doorway. This can also be solved using lighthouses to define Roomba's cleaning area (see below). 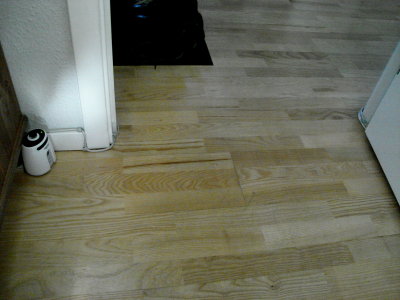 This sensor/transmitter has two functions. It can act as a barrier (virtual wall), preventing Roomba from passing the area defined by its infrared transmitter (fan-shaped area emerging from the top of the lighthouse). Or it can act as a lighthouse, defining separate areas of your cleaning area, telling Roomba to for instance clean first the bedroom, then the hall and kitchen, and finally allowing it into the livingroom to finish off. Officially, Roomba can run long enough to clean three rooms - well, we've experienced that this depends on the size of the room, of course. These are typical cleaning times for a fully charged robot:

Roomba 560 can run in various modes:

Standard clean: Starting Roomba from the docking station (home base) it will clean all rooms defined by the lighthouses (or the entire area available to it) until its battery is almost run dry. It will then return to its home base on its own to recharge, ready for the next go.

Programming: Roomba 560 can be programmed to automatically start a standard cleaning at a given time on a given day of the week and return automatically to its home base, repeating the procedure on the next schedulled day.

Manually started cleaning: Roomba can be transported to the room you wish to have cleaned and be started here manually. You can define the room border by setting the lighthouse to “virtual wall” mode. Roomba will then clean for approximately 1 hour, and stop on its own. It will not be able to find the home base as it did not start from this.

Spot clean: If you have a small area you wish to have cleaned you can place Roomba in the middle of it and select spot clean. Roomba will then clean in a small outwards spiral, returning back into the centre of the spiral when finished.

Dock: Pressing this will cause Roomba to start searching for its home base. This works best if you place the robot very close to the home base. You have to dock Roomba in this way, and not by placing it in its dock, if Roomba is to register that it is now docked. Otherwise it will start the next clean as if it was out of the home base. This can cause some problems, but we have found that if Roomba will not recognise its dock, you can “reboot” it by switching it off completely, placing it in front of its dock, switching it on and pressing the docking button.

iRobot Roomba 560 can be bought in Denmark at Støvsugershop.dk, whom we find have very good service and expertly handling of complaints and requests. Please be aware that the official importer is not Støvsugershop, but rather a company called Witt, who also takes care of any repairs in their “certified iRobot Roomba service repair shop”.

Also please be aware that new models may be released in which improvements and corrections are implemented, so please check the iRobot website or any of the above related websites for updates and new models which may suit your needs better.